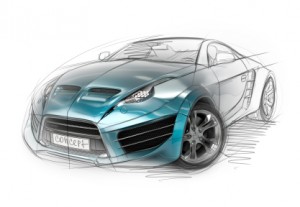 Get to Know the Best Cars You Might Never See

When auto designers are allowed to stretch their imaginations, they can come up with some wildly inventive, and cool, vehicles. These “concept cars” allow designers to think outside of the box in an attempt to come up with the industry’s next great innovation.

Often built for display at annual auto shows, concept cars are also used to gauge how the audience reacts to certain radical designs so the manufacturer can determine whether or not the designs are worth the investment to finalize for inclusion in a production vehicle. Here are the ten coolest concept cars we’ve found at this year’s auto shows.

Chevrolet Code 130R – While practical economy cars and family-friendly SUVs continue to one-two punch American households, Chevrolet brings us the sporty rear-drive coupe, the Code 130R. Sporty in all of the right places and turbocharged to boot, this four-seater coupe is a concept car that might actually show up in show rooms before you know it.

Acura NSX – The NSX has long been a thorn in the side of Acura’s concept car history, but this year, the company seems to have finally got it right. Long and sleek with a generous wheel-to-body proportion, the two-door NSX looks elegant and sporty at the same time.

Kia Track’ster – If Kia’s going to build a concept car and then put an apostrophe in its name, then it had better make sure the car is cool. Luckily, the Track’ster is! With its fat tires and short, broad shoulders, this chubby little sportster looks more than capable of taking on the Mini Cooper for best mini of the year.

Mazda Takeri – Another concept car that looks ready for the assembly line is Mazda’s Takeri. This beautiful show car looks fantastic and its low and aggressive design is lightweight and surprisingly green. The concept version is equipped with Mazda’s Skyactiv-D diesel engine and a host of eco-friendly attributes.

Bentley EXP 9 F – When was the last time you heard the words “Bentley” and “concept car” used together in the same sentence? Well, if the EXP 9 F has anything to say about it, you’ll be hearing them used together a lot. Bentley’s pseudo SUV got a ton of attention at this year’s car shows, especially with its huge wheels and Iron Man-like design aesthetic.

Lamborghini Aventador J – While Bentley is a rarity on the concept cars scene, Lamborghini practically owns it. The bullet-shaped Aventador J continues the Italian designer’s fascination with razor sharp lines and the everlasting thrill of the drive. With no roof and no windshield, this Mach-5 look-alike is all about the “extreme driving experience.”

Lexus LF-LC – If the Lambo Aventador J and the Mazda Takeri had a baby, it might wind up looking like the Lexus LF-LC, and that’s not a bad thing at all! This gorgeous car is unlike anything the company has come up with before. Unfortunately, Lexus did state that the LF-LC will never see production light of day, or at least not in its current design state.

McLaren P1 – The McLaren P1 is a remarkable feat of engineering. Low to the ground and super aerodynamic, the P1 has more nooks and crannies for channeling away airflow than any other concept car. Equipped with a 618hp V8, this supercar grabs your attention on the track as much as it does on the floor.

Porsche Panamera Sport Turismo – Porsche’s latest concept car is the Panamera Sport Turismo wagon. But, in as little as two years, you can remove the word “concept” from that last sentence. This brilliant and beautiful looking wagon is short-listed to become one of Porsche’s upcoming production cars. It’s the family wagon that doesn’t look like a family wagon; it looks like a Porsche!

Peugeot Onyx – Peugeot’s designers went all out for the Onyx. The car’s dashboard is made out of compressed newspapers. Its front fenders and doors are covered in a single sheet of gleaming copper that’s intended to develop a patina over time. And the interior? How about wool felt? Sure, it all sounds weird, but that’s what makes concept cars so fun and cool, and the Peugeot Onyx has both of those in spades!