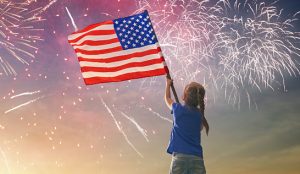 Independence Day is around the corner, a time for America to celebrate its birthday. It is also a time to remember our military who fought and continue to fight for our nation’s values. If you are in the military, there are many events taking place around the country that are honoring service members on July 4, and some places are offering special military discounts.  From parades to theme park celebrations, chances are there is something fun going on in your neck of the woods.  Below are just a few events and activities you may want to check out.

There are many events taking place around the country that are honoring service members on July 4, and some places are offering special military discounts.

This AAA Five Diamond resort is hosting an array of July 4th activities as part of its annual Fourth of July Freedom Fest celebration.  Enjoy live music and watch as a member of the All Veterans Parachute Team jumps out of a plane. Salute America’s heroes and view the vintage air show on July 4 featuring more than 28 military aircraft piloted by retired veterans. There will also be six nights of fireworks, military tributes and more.

Freedom Fest concerts and fireworks shows are complimentary for overnight guests of the hotel or those dining same-evening in La Hacienda, Bourbon Steak, Toro Latin Restaurant & Rum Bar or Ironwood American Kitchen. According to the website, a percentage of proceeds during Freedom Fest will benefit Friends of Freedom, a non-profit organization dedicated to supporting veterans, active duty service members and their families.

The theme park Great America will be honoring current and former military men and women with free park admission. Up to six of their guests can receive discounted admission tickets. From stomach-turning roller coasters to kids’ rides and a waterpark, Great America offers a day of fun in the sun near San Francisco and Silicon Valley.

Worlds of Fun, an exciting theme park with rides, shows and attractions for people of all ages, thanks America’s military by offering active duty service members and veterans complimentary admission on July 4. Military and veterans can purchase up to six discounted tickets for immediate family members.

The Coca-Cola® July 4th Fest is actually part of a 5-day festival from June 30 through July 4. There will be world-class rides, a DJ, games, and a spectacular fireworks display choreographed to a patriotic soundtrack. All active duty, National Guard, reserves and retired military will receive complimentary admission with a valid U.S. military ID.  Military families can receive discounted admission.

Spend Independence Day exploring Gorilla World, Monkey Island, Rhino Reserve, Hippo Cove and other exciting animals and exhibits at the Cincinnati Zoo. Active and retired members of the military will receive free admission to the zoo on July 4.  Military members can also purchase up to six half-priced admission tickets for their immediate family members.

Tribute to the Armed Forces Program

Enjoy the thrills of adrenaline-pumping rides and slides as Dorney Park & Wildwater Kingdom presents its annual Tribute to the Armed Forces program July 1 – 4. Active and retired military, National Guard, veterans with honorable or medical discharge and Reserve Officers’ Training Corps can receive a free regular admission ticket. Active and retired military can also buy up to six admission tickets at 50% off for members of their immediate family. Valid military ID required. Purchase tickets at the Dorney Park ticket window or online.

This ceremony honors all United States military who have made the ultimate sacrifice while defending our country. The event will feature a wreath laying ceremony, 21-gun salute, reenactors firing musket volleys and fifers and drummers playing Colonial music.

Members of the U.S. Armed Forces and veterans are eligible for $4 off the Adult General Admission price of $18.

Mount Vernon’s annual Independence Day event salutes President Washington with daytime fireworks over the Potomac River, special military re-enactments, a performance by the National Concert Band, and a wreath-laying ceremony. There will also be an inspirational naturalization ceremony for new American citizens.

The Kings Dominion theme park will be celebrating Independence Day with performances from military bands, firework shows, an appearance by Uncle Sam, and of course, fantastic rides. The park is offering free admission for active and retired military and veterans with honorable or medical discharge. Discounted tickets are available for military friends and family.

West Lawn of the U.S. Capitol (concert will also be broadcast on TV)

Free – no tickets are necessary

Hosted by John Stamos, this concert pays an all-star salute to our country, our military, their families, and our fallen soldiers. It will feature fireworks, as well as performances by Jack Everly, the U.S. Army Herald Trumpets, the United States Army Band “Pershing’s Own,”  The U.S. Army Presidential Salute Battery, the National Symphony Orchestra, and others.

A Capitol Fourth will be broadcast live on PBS from the West Lawn of the U.S. Capitol and will also be shown to United States troops around the world on the American Forces Network.

Visit the individual websites for details, pricing, exclusions and other information. Military ID is required for all military discounts.