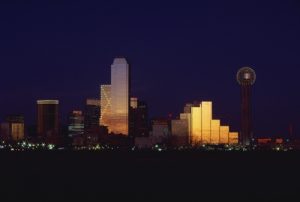 While members of the armed forces are supported by citizens across the country, there are a few areas which better cater to the specific needs of service members and their families. Locations with nearby bases, a surplus of businesses which offer discounts to personnel of all branches, and affordable deals on property purchases,  rank the highest with enlisted members of the armed forces and veterans.

If you are considering packing your things and moving to a new city, or just want a little R&R, first consider the following military-friendly cities.

Dallas, Texas
Within close proximity to Naval Air Station Joint Reserve Base Fort Worth, the third-most populous city in the Lone Star State serves as the backdrop for the prestigious annual Dallas Military Ball. Additionally, the BNSF Railway company, which ranks high on lists of military-friendly companies, is headquartered nearby and employs a significant number of service members.

Jacksonville, Florida
This metropolitan area – which is the largest city in the Sunshine State – is home to numerous military bases, and has the third-largest armed forces presence in the country. The nearby Naval Submarine Base, Kings Bay, offers service members the use of a number of facilities and plentiful off-base military housing units to live in.

Charleston, South Carolina
As the location of the military college, The Citadel, and host to the Joint Base Charleston, South Carolina’s oldest city is also home to many members of the armed forces. Numerous businesses in this metro area offer substantial discounts to military personnel residing both on- and off-base. In addition, the American Military Museum is located here.

Columbus, Georgia
Home to Georgia Military College, this city is located near Fort Benning – which supports thousands of service members and their families, as well as numerous reserve units and civilian employees. Due to this, the metro area has one of the largest populations of armed forces personnel.

Baltimore, Maryland
The site of numerous career fairs aimed toward military veterans, this city’s affordable housing prices have resulted in a considerable increase in the number of service member homeowners during recent years. The uptick may also be due to the location of the Baltimore Military Entrance Processing Station at Fort George Meade.