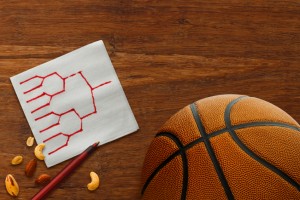 March Madness, also known as the NCAA Men’s Division 1 Basketball Tournament, takes place March 15-April 4.  For college sports fans, this is one of the most exciting times of the year and one of the most exhilarating competitions to watch.  Are you getting ready for the madness?  Whether you want to take part in an event near your military base or enjoy a game in person, there are lots of ways you can celebrate the action of the Big Dance.

What: View all March Madness games

When:  Throughout the tournament

The Samuel Adams Brewhouse features 28 TVs plus a theatre screen. They will be showing every March Madness game and offering “Mad Chef” specials.  This family-friendly pub-style dining experience will also be showing the NCAA Women’s Basketball Championship games. Need a lift? They run a free shuttle service on  Thursday, Friday and Saturday nights to and from any Family and MWR location on Fort Knox.

What: Food and drink specials every game night, plus Bracket challenge

When: Throughout the tournament

Magruder’s is March Madness central for residents in the Ft. Jackson area.  They offer short order food, pool, darts, video games, and a wide screen television.  Stop by for food and drink specials every game night and participate in the Bracket challenge to see if you can win a prize.

Pick up your bracket on March 14 and participate in the free March Madness Bracket Challenge. Scoring will be by round and Commander’s Cup points will be awarded for the top three bracket submissions. Brackets must be submitted by close of business on March 16.

What: Discounted tickets to the  2016 Atlantic 10 Basketball Championship

Take advantage of a military discount on tickets to the 2016 Atlantic 10 Basketball Championship, featuring 14 teams in five action-packed days. Tickets start at $15 each.

Why just watch March Madness when you can participate in your own competitive tournament?  The Coral Reef Fitness Center (CRFC) is once again hosting its annual March Madness Basketball tournament and you don’t have to be a college basketball star to get in on the fun and fitness. Call CRFC at (671)366-6100 for details.

What: Military discount on tickets

Go beyond March Madness and bring college basketball excitement to your family any time of the year at the College Basketball Experience. This world-class entertainment facility celebrates the game of men’s collegiate basketball all year round with a variety of interactive exhibits.  It is also home to the National Collegiate Basketball Hall of Fame. Active military receive a special $10 admission. Must show Active Military ID card. See website for more information.