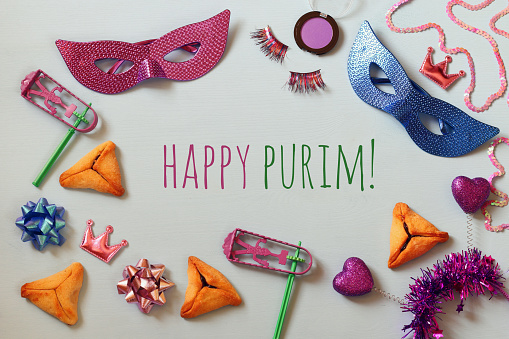 The fun, colorful and food-filled festival of Purim is one of the most joyous and jubilant Jewish holidays. Celebrated annually on the 14th and 15th days of Adar, the twelfth month of the Jewish calendar, Purim usually falls in March. This year Purim starts at sundown on March 20 and ends at sundown on March 21.
Purim is a happy holiday that is observed by Jewish people around the world. Even if you are not Jewish, you can still take part in some of the special activities that honor this triumphant story in Jewish history.

Click To Tweet
Give gifts to those in need
An important theme of Purim is Jewish unity. In honor of this, one of the laws of Purim is to help each other and give to those in need. Synagogues may collect money to provide goods or services to the community, but you can also give gifts, such as food, clothing or money to individuals on your own. The requirement is to give a generous gift to at least two people and the gifts should be presented during the day.
Dress in costumes
The story of Purim is written in the “Book of Esther.” The book says that Queen Esther, the heroine of the story, initially hid her Jewish identity. As a nod to this, people of all ages wear costumes during Purim. Some dress as important figures in the Purim story, such as  Queen Esther, while others wear superhero or other types of non-religious costumes.
Did you know there is a Facebook Purim Costume Exchange group? If you’re on a budget and want to save on your family’s Purim costumes, join this group of people who are looking to lend, give, exchange and sell used costumes. You can also start your own costume exchange group with others in your area.
Listen to a “Book of Esther” reading…and make noise!
It is a Purim commandment (mitzvah) to listen to the “Book of Esther” read aloud twice during the holiday, once in the morning and again at night. It is a dramatic, hour-long story accompanied by audience participation. Every time the name “Haman” – the story’s enemy – is read, the listeners are encouraged to make as much noise as possible to drown out the name of the evil person. Sometimes a noisemaker called a ra’ashan in Hebrew, or grager in Yiddish, is used.
Share food with friends
As with most joyous holidays, food is an integral part of the celebration. During Purim, observers are required to exchange gifts of food with friends. Traditionally, the food is already prepared and ready to eat, and delivered through a third person such as a relative or a child.
One of the most popular food items to give during Purim is Hamantaschen (also spelled hamentasch, homentash, and homentasch) a sweet, triangle-shaped pastry-type cookie made with a variety of fillings such as poppy seed, prune, jam or chocolate spread. Hamentaschen is symbolic and there are various beliefs about the treat’s meaning. Since it contains the word “Haman,” some say it is named after the triangle-shaped hat that Haman is said to have worn. Others believe it represents Haman’s ear. The concealed filling is said to signify the plot to defeat Haman and the “hidden” miracles that helped the Jewish people survive. No matter the significance, it is a yummy treat and if you’d like to make a batch, here is an easy Hamantaschen recipe.
Have a festive meal and a toast (or two!)
Again, like most cheerful celebrations, Purim is food-centric. On Purim a special daytime meal, a seudah, is served and adults and children can attend the meal in costume. For those of age, alcohol consumption is permitted and even encouraged. To keep your food budget in check, try to center your meals around in-season vegetables and fruits, shop at your local commissary and be sure to take advantage of coupons.
Purim is a carnival-like holiday filled with food, family, friends and meaningful traditions. Read more about the origins and customs of this joyful holiday at MyJewishLearning.com. Have fun!
Chag Purim Sameach!
Omni Financial does not endorse, recommend or imply affiliation with the listed organizations or websites.