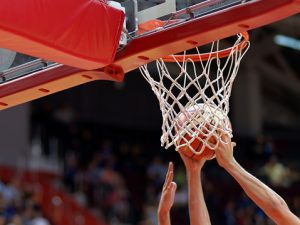 Few spectator sports draw more passionate and frenzied fans than college basketball. Practically every game is played in sold-out arenas and every year the NCAA Basketball Tournament is one of the most-watched televised sporting events.

The slam dunk is one of the most popular scoring moves in the game. But, did you know that from 1967 to 1976 the NCAA banned it? It can all be blamed on Lew Alcindor. The reason the move was banned was because the man who would go on to become Kareem Abdul-Jabbar couldn’t be stopped from dunking! The NCAA felt they had to try and limit his dominance on the court, so they banned the move.

Canadians are most associated with hockey, but did you know it was a Canadian physical education teacher who invented the game of basketball? His name was James Naismith and he invented the game in 1891 as a way of keeping his students busy in the gym on rainy days.

The first basketball hoops were made from empty baskets that were once used to hold peaches. The problem was, however, that the officials had to retrieve the ball after every score because the bottoms of the baskets were left intact. It wasn’t until the early 1900s when string nets were introduced.

March Madness attracts a lot of attention and some of that attention can pull people away from other, more important duties, like work! During the March Madness tournament, WalletHub estimates that corporations lose roughly $1.9 billion per HOUR due to poor productivity while the games are being played.

Odds are, if your favorite team is ranked lower than number eight, they won’t have much chance of winning the Championship. To date, the lowest seed ever to win the whole thing was the eighth seed and this happened when the major underdog Villanova beat the number one seeded Georgetown in 1985. The game is still considered the biggest upset in the history of the NCAA basketball tournament.

In 1961, Ohio State was the top-ranked team in the NCAA. At number two was the University of Cincinnati. The two teams would be the only two teams from the same state to play against each other in the Championship game. While Ohio State was the defending champs and the odds-on favorite to win, Cincinnati wound up with the victory, beating the Buckeyes in overtime 70-65.

Five is an unlucky number to be seeded at in the NCAA Tournament because to date no number five seed has ever won the title. There were three number five seeds to make it to the Championship game, Florida (2000), Indiana (2002), and Butler (2010), but they each lost.

Kentucky is the winningest team in NCAA Championship history with 11 titles to their name. But, if there’s one team that has Kentucky’s number, it’s Marquette. The two teams have played each other ten times in tournament history and Marquette has come out the victor six times.