10 Interesting Facts about the National Anthem 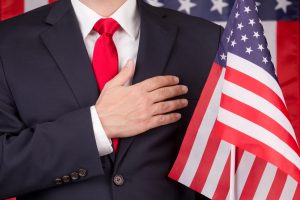 Our country’s national anthem, the Star-Spangled Banner, is nothing if not inspiring. Written by lawyer and poet Francis Scott Key while being held prisoner aboard a British ship during the bombardment of Baltimore, the poem has had a dramatic impact on the shaping of America, our sense of patriotism, and our enduring love for our country.

But, despite everything we’re taught in school about our national anthem, there remain some things that aren’t as well known. So, with March 3 officially being recognized as National Anthem Day, there’s no better time to take a closer look at our country’s most beloved song. Here are ten interesting facts about the Star-Spangled Banner that just might surprise you.

10 Interesting Facts about the National Anthem

#1: The Melody is Based on an Old English Drinking Song

There’s no arguing that the melody that our anthem is set to is bombastic, emotional, and all-American. But, in truth, it has no basis in American music whatsoever. The melody is actually based on an old English drinking song called To Anacreon in Heav’n. It was the official song of the Anacreontic Society, an 18th century men’s social club in London.

Francis Scott Key was a poet, not a musician, so the words he wrote were originally in the form of a poem which was to be titled Defense of Fort McHenry. Key was inspired to write the poem after seeing the American flag raised in victory after the 27-hour-long bombardment of Baltimore by the British. It was Key’s brother-in-law who bridged the poem to the tune of To Anacreon in Heav’n.

#4: Today’s Version of the Anthem is Much Different from the Original

What you hear today when the Star-Spangled Banner is sung is much different than what it sounded like over 200 years ago. Originally, it was designed to be sung by a group of people together, but today it has been converted into a much slower song sung by a soloist and often without any musical accompaniment.

#5: The Song is Surprisingly Not Easy to Sing

Of all of the songs performed in front of American crowds, you would think that our national anthem would be the easiest. But, the song has stumped even some of our country’s biggest and best singers and artists. Whether it’s forgetting words or failing to reach the song’s epic high note, more singers get it wrong than they do right.

Believe it or not, the Star-Spangled Banner didn’t officially become our national anthem until 1931 after Robert Ripley published a “Ripley’s Believe It or Not!” cartoon in 1929 which he pointed this fact out. Ripley received a lot of backlash for the cartoon, to which he responded by telling his detractors to contact their congressmen if they were so upset. This resulted in five million people signing a petition asking Congress for a national anthem and just two years later President Hoover signed it into law that the song would be our national anthem.

#7: The Flag was Hidden During World War II

#8: There Were Two Flags Raised at the Battle of Baltimore

The poem mentions that the flag flew “through the perilous fight,” but that’s not entirely true. There were two flags used at the Battle of Baltimore, the massive 30-by-42-foot garrison flag and a smaller 17-by-25-foot storm flag. During the battle, the rain was so heavy that the larger flag (which weighed over 500 pounds when wet) had to be lowered and replaced by the smaller storm flag. In the morning, the storm flag was dropped and the large flag was hoisted.

#9: The Anthem is Longer than One Verse

Most Americans only know the first verse of the Star-Spangled Banner because that is all we really hear when it’s sung at sporting events. But, the original anthem consisted of four verses, with each one ending in “O’er the land of the free and the home of the brave.” A fifth verse was added in 1861 by poet Oliver Wendell Holmes. His verse included the words “the traitor that dares to defile the flag of her stars,” and it was added to support the Union cause in the Civil War.

Although Key penned one of our most patriotic poems, he was adamantly against America entering into the War of 1812. He called the war “a lump of wickedness.” It was only when the British raided nearby communities in the Chesapeake Bay that he had a turn of heart, which even had him serving in a wartime militia in Georgetown.