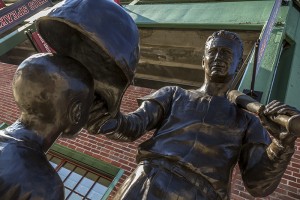 Baseball is the quintessential American sport.  At stadiums throughout the country, feelings of patriotism fill the air as fans listen to the Star Spangled Banner and proudly salute the American flag before watching their beloved team.

Baseball is commonly referred to as “America’s favorite pastime” and the sport has a long-standing history of supporting service members.  Ballparks offer military discounts for tickets, military are invited to throw ceremonial first pitches, and teams pay public tribute to soldiers at various times during the year.  But did you know that many National Baseball Hall of Fame Members were soldiers themselves, and that 64 served the U.S. Armed Forces during wartime?

For a complete list of Baseball Hall of Fame Veterans who have served during wartime, visit Baseball-Almanac.com.