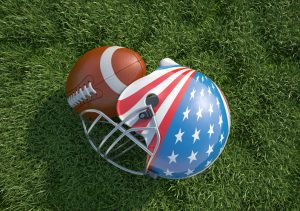 • The College Football Playoff National Championship trophy stands 26.5 inches high and weighs a whopping 35 pounds. The trophy is made of 24-karat gold, bronze and stainless steel.
• The game is broadcast annually on ESPN. In 2015, the network signed a 12-year agreement to broadcast the game at a cost of $7.3 billion.
• The College Football Playoff Committee has three members that never played collegiate football – Mike Tranghese, Condoleezza Rice, and Steve Wieberg.
• In 1940, there were just three bowl games – the Oil Bowl, the Salad Bowl, and the Raisin Bowl.
• The school with the most bowl game appearances is Michigan at 31.
• The first Orange Bowl was played on New Year’s Day in 1935 between the University of Miami and Bucknell. Bucknell won the game in a blowout, 26-0.
• At the Division I level, teams must win at least six games to be eligible for a bowl game.
• The record for most laterals in a game occurred on the final play of the 2005 Alamo Bowl between Nebraska and Michigan. Michigan performed seven straight laterals on the last play of the game. And, they almost pulled off a remarkable win before the ball carrier was forced out of bounds at Nebraska’s 15 yard line. Michigan ultimately lost, 32-28.
• The college with the most National Championship victories is Yale, with 18. This is impressive, especially since the Ivy League school hasn’t won one since 1927.
• During the 1985 Orange Bowl, Oklahoma scored what they thought was a go-ahead field goal, prompting the Sooner Schooner (a covered wagon pulled by two Shetland ponies) to race onto the field to celebrate. But, the field goal was waived off and the team was penalized 15-yards due to the Sooner Schooner entering the field of play. After the penalty was assessed, Oklahoma attempted the field goal again. This time they missed the field goal and wound up losing the game.
• In 1954, if a college team played in a bowl game, they were banned from the bowl games the following year. This was designed to give every team a better chance at appearing in a bowl game.
• In 1950, Oklahoma was named the national champion before the championship game was even played. Making matters worse was the fact that the Sooners would later go on to lose their bowl game!
• Princeton was the very first college football National Champion in 1869. The team only played two games that year.
• The West Virginia Mountaineers are the winningest Division I-A team (663-442-45), but they have never won a national title.
• In 1956, Bobby Grier, an African-American fullback and linebacker for the Pittsburgh Panthers, became the first player to break the color barrier of the Sugar Bowl.

The Playoff Semifinals were held on December 31, 2016 at the Peach Bowl and the Fiesta Bowl. On January 9, 2017, the winners of those two bowl games will meet in Tampa, Florida for the annual National Championship game with the winner being crowned the National Champ.