Famous people who served in the Coast Guard 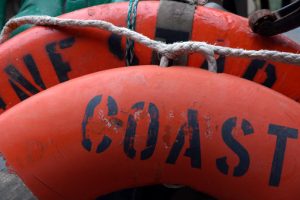 This August 4, the United States Coast Guard celebrates its 228th birthday!  Omni is proud to take a moment to recognize the extraordinary importance of this military service.

Among the Coast Guard’s responsibilities are maritime homeland security, maritime law enforcement, and search and rescue. The Coast Guard protects our country, marine transportation system, natural and economic resources, and our maritime interests around the globe. It played a vital role in World War II, the Korean War, the Vietnam War, and Operation Iraqi Freedom, the Mariel boatlift, Hurricane Katrina response, and many other local, national and international operations.

The Coast Guard has approximately 42,000 active duty members, 7,500 reservists, and 30,000 auxiliary members.  While some Coast Guard members make military service a lifetime career, others go on to pursue other passions. You may be surprised at how many famous people, including athletes and Hollywood celebrities, served in the U.S. Coast Guard!  In honor of the Coast Guard’s birthday, we’ve compiled a list of just a few Coast Guard veterans you might recognize:

Tom Blake is considered one of the most influential people in the surfing world.  He created the first hollow surfboard, virtually transforming the sport and increasing its popularity. He also invented surf photography which inspired more people to try surfing.

Despite already being successful in his career, Blake enlisted in the Coast Guard when he was 40 years old. He felt it was the “thing to do” after the Japanese attacked Pearl Harbor. He had lifeguarding and waterman expertise which helped him rise through the ranks. He became a platoon leader commanding a search and rescue team.  He also wrote rescue manuals and survival guides for the military. He was honorably discharged from the Coast Guard and returned to his surfing career.

The Bridges are Hollywood royalty, and they are also a Coast Guard family.  Lloyd Bridges and his sons, Beau and Jeff, all served in the United States Coast Guard. In 2011, they were each honored with a Lone Sailor Award which, according to The United States Navy Memorial, is presented “to Sea Service Veterans who have distinguished themselves, drawing upon their Sea Service experience to become successful, in their subsequent careers and lives, while exemplifying the core values of Honor, Courage and Commitment.”

Lloyd Bridges had been a highly accomplished actor for Columbia Pictures before leaving the company during World War II to join the United States Coast Guard. He was a member of the Coast Guard Auxiliary in the 11th District, eventually becoming an honorary commodore in the Auxiliary. Upon leaving the Coast Guard, he continued his stellar acting career appearing in theatre, television and movies, including the hit comedy film Airplane!

Inspired by his father’s work on the television series, Sea Hunt which involved meeting Coast Guard personnel, award-winning actor Beau Bridges enlisted in the Coast Guard Reserve in 1959. He served for eight years.

In a Coast Guard Compass interview, when asked what he remembers most about his Coast Guard service, he said:

“I think it prepared me for life, my training in the Coast Guard. It was a peacetime service, so I didn’t see any wartime action; but I learned a lot about life. How to take care of myself. How to be of service to other people. And I’ve tried to carry on that tradition. And I’ve also met a lot of friends. I think what’s great about the military is, you join another family when that happens.”

Before becoming “The Dude,” Oscar-winning actor Jeff Bridges spent seven years as a member of the Coast Guard Reserves. His last rank was Petty Officer Second Class and his primary unit was BM, USCG Reserve Center San Luis Obispo, DA. In a Military.com article it states that one of the Bridges’ tasks was to chip paint of buoys.

Many famous people, including some athletes and Hollywood celebrities, served in the U.S. Coast Guard.

While he played the Skipper of the grounded S.S. Minnow in the 1960s TV sitcom Gilligan’s Island, actor Alex Hale, Jr. was actually a Coast Guard veteran. He was a Seaman E-3 in the Coast Guard, serving between 1942-1945.

Champion golfer Arnold Palmer, aka “the King,” was already considered a force in the amateur golf scene by the time he went to college at Wake Forest University. However, during his time at college, his roommate was killed in a car accident. This affected Palmer in a profound way. In an excerpt of an interview in the Coast Guard Compass, Palmer said “I was pretty distraught over that and decided that I needed to get away…I joined the Coast Guard.”  He became a yeoman for Rear Adm. Roy L. Raney, 9th Coast Guard District commander. He was also a photographer for the Coast Guardsman.

Palmer said that his time in the Coast Guard gave his life direction. He became a military advocate, encouraging other young people to join the service. In an interview, he stated:

“The knowledge that I gained, the maturity that I gained in the Coast Guard was unbelievable. It matured me. It made me a better person for the world and I believe that in my own right. The military isn’t just restrictions and military duties. It’s learning and it’s very important that young people have that opportunity to learn and to know themselves a little better and I think the military helps put that in the right perspective.”

Before winning a Grammy and being inducted into the Rock and Roll Hall of Fame, singer-songwriter and musician Tom Waits served in the Coast Guard.

Happy Birthday to the Coast Guard!