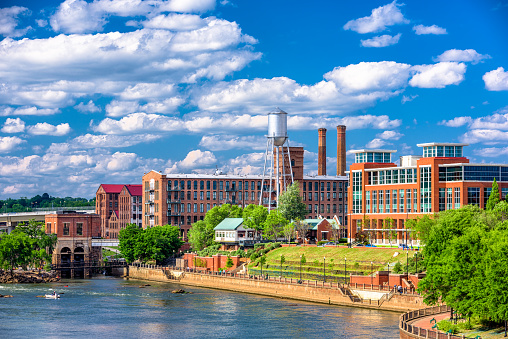 Historic, artsy and an adventure-lover’s paradise are just a few of the words that describe Columbus, Georgia, a city on the Alabama border. Columbus is also just north of Fort Benning, a United States Army post that supports more than 120,000 people including active-duty military and their families, reserve component soldiers and civilians.

Columbus, Georgia near Fort Benning is historic, artsy and an adventure-lover’s paradise.

Click To Tweet
Omni Financial has an office in Columbus, right near the Fort Benning base. We love it here and for those of you who are new to the area, we think you will too. If you’re looking for some fun things to do while you are in Muscogee County, here are some suggestions from our Columbus office team members:
Bike the Chattahoochee RiverWalk
Spanning 15 miles along the Georgia-Alabama border and hugging the banks of the Chattahoochee River is Chattahoochee RiverWalk. Grab your bike or running shoes and take a trip along this scenic trail that passes by many notable places including the site of the Battle of Columbus, Georgia, the National Civil War Naval Museum and the Oxbow Meadows Environmental Learning Center.
Have an out-of-this-world time at the Coca-Cola Space Science Center
The Coca-Cola Space Science Center is a division of Columbus State University and is dedicated to providing visitors with experiences in astronomy and space science. View the largest collection of NASA space shuttle artifacts in Georgia, take in a spectacular planetarium show at the Omnisphere Theater, and have fun with interactive exhibits including the Space Shuttle Odyssey.
Connect with history at The National Civil War Naval Museum
The National Civil War Naval Museum offers visitors a unique look at Civil War history. It houses the CSS Jackson, the largest surviving Confederate warship and the country’s largest displayed collection of Civil War Naval-related flags. Several different tours are available including “A Sailor’s Life” given by a Living History Interpreter in Civil War Sailor uniform. Active military receive a reduced admission charge.
Take a thrilling raft ride on the Chattahoochee River
The stretch of the Chattahoochee River that runs from downtown Columbus, GA to Phenix City, Alabama is considered to be the longest urban whitewater course in the world.  Thrill seekers from around the globe come to the area to challenge themselves on rapids that range from class II to class IV or higher. The whitewater run pumps up to 13,000 cubic feet per second and has been named by USA Today as one of the “Top Man-Made Adventures in the World.”
Go back in time at the Lunch Box Museum
Whatever happened to that lunchbox you or your mom and dad had as a kid? Chances are you’ll find a version of it here at the Lunch Box Museum, the largest lunch box collection in the world. The Lunch Box Museum, which has been featured on The Food Network and has been recognized by the Smithsonian Institution, is part of the Rivermarket Antique Mall. It is a nostalgic, floor-to-ceiling showcase of more than 3,000 lunch boxes and thermoses. This small, off-the-beaten path museum is a quirky trip back to a time when metal lunch boxes ruled the school cafeteria.

The Lunch Box Museum in Columbus, GA is a quirky trip back to a time when metal lunch boxes ruled the school cafeteria.

Click To Tweet
If you’re moving to the Fort Benning area, just stopping by, or are currently stationed here, we hope your time here is pleasant and memorable. Be sure to stop by our office on Victory Drive and meet the Omni Columbus team!
Visit the individual websites for complete details including hours of operation and pricing information. Omni Financial does not endorse, recommend or imply affiliation with the listed companies, events or organizations.