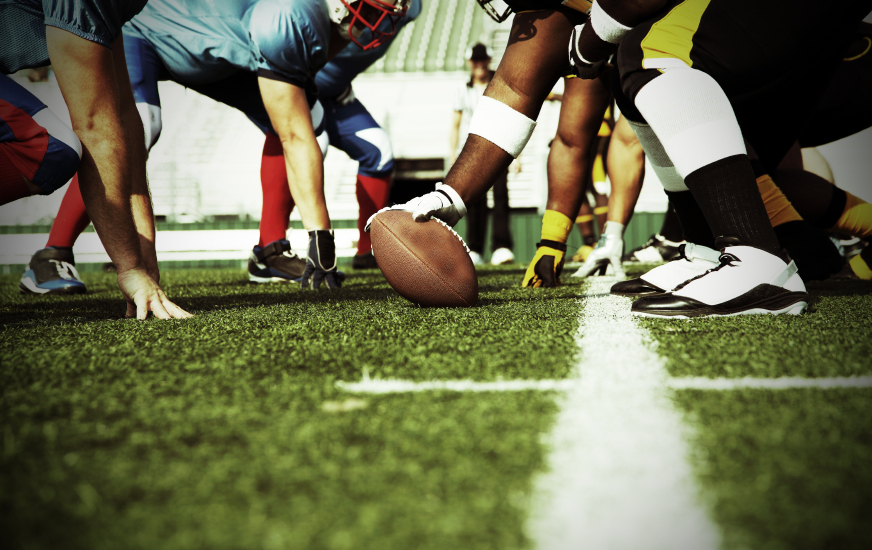 Thanksgiving is a family holiday like no other. Family and friends come from far and wide to convene in one place to relive old memories, enjoy a fabulous feast of epic proportions, and pass out in a food-fueled haze of contentment. But, if your home is like most, there is also a lot of yelling going on in the living room because Thanksgiving is also a day chock-full of football games.
To get you ready for this year’s action, we thought we would take a look back at some of the most memorable Turkey Day football moments. Ready for kickoff? Let’s go!

#9 – Brother Vs. Brother
In 2011, brothers Jim and John Harbaugh became the first pair of brothers to coach against each other and it happened when the Baltimore Ravens played the San Francisco 49ers in the night game. The meeting was won by younger brother John’s Ravens 16-6.

#8 – Mr. Thanksgiving’s Big Game
Detroit Lions running back, Barry Sanders, never made the Super Bowl despite being one of the game’s best players, but he did earn the name “Mr. Thanksgiving” due to his incredible performances on Turkey Day. His best came against the Chicago Bears in 1997. Mr. Thanksgiving ran for 167 yards and bopped and weaved his way to three touchdowns.
#7 – Earl Campbell’s Masterful Performance
When the Houston Oilers took on the Dallas Cowboys in 1979, it would wind up being the only time Hall of Fame running back Earl Campbell would play on the holiday. It would wind up being one of the best games of his career. Campbell ran for 195 yards and two touchdowns against the ‘Boys, leading the Oilers to a 30-24 win.
#6 – O.J. Simpson’s Record-Breaking Day
In 1976, O.J. Simpson and the Buffalo Bills took on the Lions in Detroit. During the game, O.J. ran for a Thanksgiving Day record 273 yards. But, despite his efforts, the terrible Bills still lost the game, 27-14.
#5 – The 1998 Coin-Toss Saga
In 1998, the Pittsburgh Steelers visited the Detroit Lions and the game was a great one that went into overtime. That is, until it was time for the overtime coin toss. During the infamous coin toss, Steelers running back, Jerome Bettis, reportedly said “heads-tails,” and the referee, Phil Luckett, went with the first word he heard instead of the second. Unfortunately for Pittsburgh, the coin came up tails and the Lions got possession of the ball. The Lions scored and the Steelers lost and the controversy began.

#4 – The Cowboy’s Miracle Finish
Prior to 1974, the Cowboys had never lost to their rival, the Washington Redskins, on Thanksgiving Day. But, when the two teams met up in 1974, they were very close to doing so, losing 16-3 in the third quarter with their star QB, Roger Stauback, out with a concussion. Enter rookie Clint Longley. Having never even attempted a pass in the NFL, Longley had an incredible game, completing 11 out of 20 passes for 203, one of which was a 50-yard touchdown strike with 28 seconds left in the game that gave the Cowboys a miraculous come from behind win.
#3 – Randy Moss’s Three for Three
When the Cowboys (and 20 other teams) famously passed up on Randy Moss in the 1998 draft, the outspoken receiver said that they would regret the decision. That year, the Vikings, who ultimately drafted Moss, played the Cowboys on Thanksgiving and Moss used the national exposure to show the Cowboy fans what they missed out on. Moss caught just three passes that day, but they accounted for an incredible 163 yards and oh yeah, all three were for TDs. The Vikings won 46-36.

#2 – Thanksgiving Day’s Third Football Game
Since you can never have enough football on Thanksgiving Day, and because many NFL teams were tired of the Cowboys and the Lions getting all of the attention (and dollars) on Turkey Day, the NFL introduced a third football game to be played in primetime in 2006. The inaugural game was between the Kansas City Chiefs and their rival the Denver Broncos and it was a rowdy one in which the Chiefs won 19-10.
#1 – Leon Lett Touches the Ball
In 1993, a weird ice storm hit Dallas that caused the Thanksgiving Day game to include an even weirder event. Already having earned himself a notorious legacy in Dallas after his famous blunder in Super Bowl XXVII the previous January, defensive lineman Leon Lett would find himself in the middle of another blunder on Thanksgiving Day. With 15 seconds left in the game and the Cowboys holding on to a thin 14-13 lead, the visiting Miami Dolphins lined up for a 40 yard field goal. Miami kicker, Pete Stoyanovich, would wind up having his kicked blocked by the Cowboys with the ball landing on the Dallas 10 yard line. But, while the Cowboys were celebrating their “win,” Lett attempted to recover the ball. Unfortunately, he slipped on the ice, kicked the ball, and the Dolphins recovered on the three yard line. The Dolphins then kicked the chip-shot field goal for a remarkable 16-14 win as time ran out.