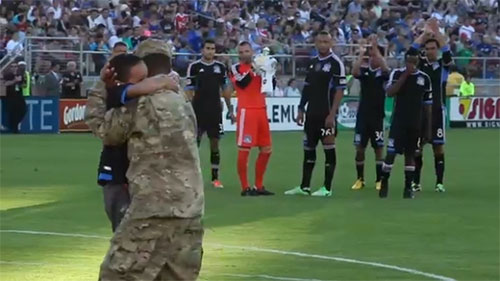 A soldier reuniting with family after a deployment overseas is always a special moment. While many soldiers choose to reunite in private, others arrange elaborate homecoming events designed to surprise their loved ones in a big way.  We’ve found some super sweet military homecoming videos that are sure to make you smile.  Warning: Get the tissues!

Colonel Rob Kiebler returned home from a tour of duty in Afghanistan and surprised his 5-year-old son Danny (a huge Star Wars fan) by dressing up as a Jedi knight.
Delivery from Santa

Navy Petty Officer 2nd Class Richard Corrales jumped out of a present surprising his children during a visit with Santa at the mall.
A Real Kick

Five-year-old Jackson Fyffe thought he was at the California Clasico soccer match to score the first ceremonial goal before the game. Instead, he got a big surprise from his mom, Lt. Colonel Celene Fyffe.
Olive Garden Order

Sergeant Coody surprised her mom and sister by pretending to be a waitress at an Olive Garden restaurant.
Scuba Soldier

A soldier arriving from Afghanistan earlier than expected surprised his family by popping up from underwater.
Graduation Surprise

Specialist Walter Smith hid in the back seat of a police car that was part of a Christmas parade procession, and then came out of the vehicle when the car stopped in front of his family.
A Home Run

Lt. Col. Bill Scherling reunited with his daughters on the ice prior to the start of their hockey game.
An Important Meeting