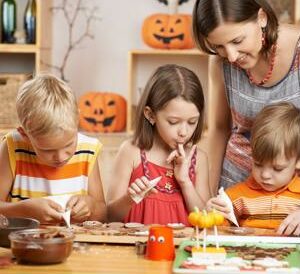 October is widely considered one of the best months of them all. The crisp air. The colorful foliage. The playoff baseball. The kickoff to college and professional football. All of it happens in this, the 10th month of the year, which serves as the beginning of the holiday season.

Perhaps the best day of October is left for last: Halloween. The spookiest holiday on the calendar, Halloween, much like other autumnal staples, comes around annually and never fails to bring a heaping helping of thrills and chills, which may be why more Americans like to get in the spirit. For example, in 2009, roughly two-thirds of young adults in the U.S. dressed in costume to celebrate Halloween, according to the National Retail Federation (NRF). Fast forward 10 years, and the total is now closer to three-quarters.

If your family is new to a military base, you may think that the traditional activities associated with Halloween may have to go on hold while you’re stationed, as military life isn’t quite the same as what it’s like back home. But think again. In fact, if anything, there may even be more opportunities to enjoy the 31st, from trick-or-treating to pumpkin carving, party-hosting to DIY’ing.

There will be candy – lots of it!
Like butter on toast or cream cheese on a bagel, candy and Halloween are a classic pairing. In fact, of the projected $8.8 billion Americans are expected to spend on Halloween merchandise in 2019, roughly $2.6 billion will be on the sweet stuff. Whether located internationally or domestically, bases have a wide assortment of trick-or-treat-related activities, from the traditional grab-and-go to the contemporary trunk-or-treating.

Appropriately titled, trunk-or-treating is a fun family activity that entails decorating vehicle trunks in a wide assortment of Halloween-themed decorations, then filling the interior with gobs and gobs of candy deliciousness. Depending on how many cars are involved, trunk-or-treating can also double as a competition, where judges determine which trunks are the most inventive, scary, unique or just plain impressive to look at.

Wear and scare
Although Halloween is mainly thought of as a holiday geared towards young children, it’s increasingly become one for adults to enjoy. For instance, among 18- to 24-year-olds in the United States, roughly 85% celebrated Halloween in 2009, according to NRF data. That number has since jumped to approximately 90%.

Military bases are among those corners of the country where Halloween participation has risen. This is particularly true when it comes to costumes. Whether you go out and buy a costume or make one yourself, dressing up for the night is a great way to have fun and create new relationships while on base. You may want to pair up with your spouse – going to a party as Hansel and Gretel, for example – or host a costume party for pets and pet parents. Due in part to the popularity of social media, Halloween costumes for pets are highly popular these days, with pumpkin hot dog, superhero and bumblebee ensembles among the most common selections this year, according to the NRF.

Treating the troops
Of course, many of the nation’s active duty military remained stationed overseas, but a number of organizations try to make far away locations feel like home through various initiatives and campaigns. For instance, Treats For Troops is a Halloween candy drive organized by Soldiers’ Angels that enlists both families and businesses to donate candy to veterans, service members and their families as well as troops who may be injured. Soldiers’ Angels aims to provide 100,000 care packages during the holiday season. You and your family can find out more about how you can serve some of your fellow brothers and sisters in arms by visiting the website.

Create masterpieces with pumpkins
No Halloween is complete without some good old-fashioned pumpkin carving. Gone are the days when jack-o-lanterns amounted to two holes for eyes and a zigzag mouth design. Stencils have been around for a while, of course, but they’re more widely available than ever, you can find them online in printable form or even on cereal boxes! You can use these as inspiration for a family pumpkin carving contest to see “boos” is best.

Cash in on deep discounts
When you think of major sales events, Christmas is usually the first holiday that comes to mind. But there are lots of deals you can cash in on for Halloween. Party supply stores like Singdiz and specialty craft stores like Michaels offer military discounts for Halloween decor, costumes, paper goods and other merchandise. In short, if dressing up isn’t your jam, you can enjoy Halloween decorating or crafts with the fam simply by taking advantage of the ways you can save money at nearby retailers or by shopping online.

As the most trusted name in military lending, Omni Financial is all treats, no tricks. We’ll be happy to help you in any way we can for loans and solutions as the holiday season kicks into high gear.

The information provided in this blog post is for informational purposes only. Omni Financial does not endorse, recommend or imply affiliation with the listed companies or organizations.