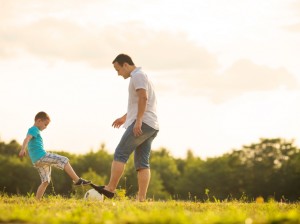 For over a century the non-profit organization Big Brothers Big Sisters of America has been making mentoring matches between adult volunteers (known as “Bigs”) and children (“littles”).  The program’s mission is to provide children facing adversity with strong one-to-one relationships that change their lives for the better.

Throughout the years Big Brothers Big Sisters has expanded its programs to include a special Military Mentoring Program (MMP) , also known as “Operation Bigs,” that supports the needs of America’s military personnel and their families. A child with a parent in the military may have feelings of separation and loss due to the deployment of his or her father or mother.  Military children may also have to deal with frequent moves, and extended family like grandparents may be far away. The MMP is designed to help children face these and other unique challenges related to military life by pairing them up with volunteer mentors who are active duty, reserve or retired/separated military personnel, as well as civilians. The Bigs provide quality one-to-one friendships and act as positive role models.

The MMP is available at select locations around the country. Eligible children have a parent who is a U.S. veteran or who is a survivor of a U.S. veteran. The Bigs and Littles spend a few hours each week together, participating in enjoyable activities. The goal is to build a long-term friendship while helping the child become more confident, succeed in school, and avoid risky behaviors.

To learn more about the impact the MMP has on military families, view this video featuring military mom Diane –