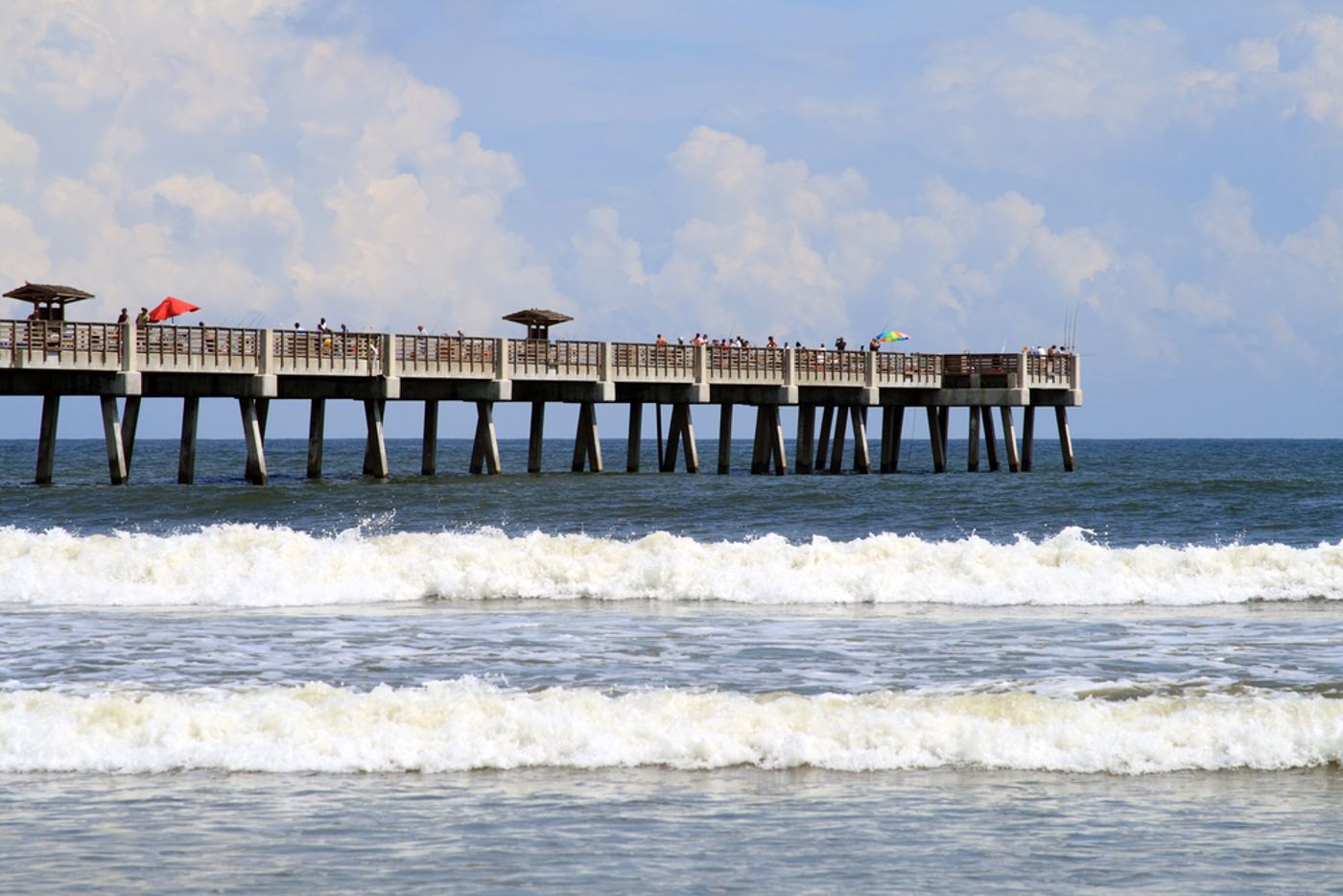 When visitors come to Florida, Jacksonville may not be the first city on their itinerary. With the world-famous Walt Disney World Resort located in the Orlando area and South Beach down in Miami, two of the Sunshine State’s more popular attractions are nowhere near what locals call the River City.

But as the most populous city in the state (home to some 929,600 people) and the largest city by area in the contiguous U.S. — nearly 875 square miles — there’s lots to see, do and enjoy in Jacksonville. These include stunning beaches, delicious restaurants and fascinating guided indoor and outdoor tours.

If you’re currently stationed at one of Jacksonville’s several military installations — or soon will be — here are a few potential things you can do with your spouse and children as you visit Jacksonville during your next long weekend, furlough or extended leave.

Cycling is another possibility at Amelia Island State Park; since the pathways here are both paved and off-road, road and mountain bikers can be equally satisfied.

The wildlife in Amelia Island State Park is perfect for bird watching. Osprey, pelicans, piping plovers and black skimmers are a few of the more common bird varieties that flock to this neck of Jacksonville’s woods.

Visit the website for more details on ticket admission, hours of operation and contact information by phone or email.

2. Jacksonville Beach
Given where Florida is located, it’s no surprise that the state is overflowing with beaches — more than 663 miles of them, in fact, according to the Florida Department of State. Jacksonville alone has a fair number of them as well, including Mayport Beach, Atlantic Beach and Neptune Beach.

But if you only visit one beach while you’re out and about in the River City, you might as well make it Jacksonville Beach. Aside from being one of Florida’s most historic beaches — incorporated as a resort city in 1907 — Jacksonville Beach is a main thoroughfare to the city’s core, since it’s adjacent to Downtown Jacksonville.

The boardwalk has many of the retailers and restaurants you’ve come to expect to find beach side, including seafood restaurants, boutiques and surfing shops.

Go to VisitJacksonville.com for more information on the Jacksonville beach scene.  There are more than 22 miles of beaches in Jacksonville alone, so there’s room for everyone.

While much of the hustle and bustle of Downtown Jacksonville is associated with the residents who live in and work here, there are a plethora of tourist attractions, including museums, theaters and architectural wonders, from the 617-foot Bank of America Tower on North Laura Street and West Bay Street to 535-foot Wells Fargo Center on the corner of Laura Street and Independent Street.

The weather in Jacksonville is gorgeous throughout the year, so it’s understandable if you’d prefer to spend your off day(s) in the great outdoors. But on the rare day it’s raining or you feel like doing something out of the heat, you may want to see what’s going on at the Museum of Science & History (MOSH).

MOSH is the perfect family activity because it’s filled with interactive exhibits and attractions that will both entertain and educate, from the Health in Motion exhibit to Atlantic Tails, which showcases the variety of coastal creatures found throughout the Atlantic Ocean.

Much like other museums, Jacksonville’s also has limited-time events that take place throughout the year. As of this writing, The Lost World of Dragons allows members to explore the intriguing history of these mythical beasts. There is also a workshop that teaches participants how to make their very own dragon streamer puppet.

The Lost World of Dragons has been open since May 29 but its last day is Sept. 6.

Before you go, be sure to visit the website for more details on how to become a member, ticket prices and when operating hours.

4. Cummer Museum
If you’re still in a museum mood, Cummer Museum should definitely be on your must-see list. Established in the late 1950s and named after Ninah Cummer, one of Jacksonville’s many historical figures, the Cummer Museum of Art and Gardens is the largest fine arts museum in Northeast Florida.

With thousands of pieces of art and sculptures lining the walls and floors of the facility — several of which belonged to Cummer herself — art buffs may be familiar with many of the masterpieces on display, from Gioacchino Assereto’s The Lamentation to Gilbert Stuart’s George Washington. There is also a guided tour that will literally walk you through the facility, ensuring that you see all the major points of interest. Artistic kids may enjoy the guided tour as well, but if it’s a bit too high-brow, Cummer Museum also offers many different classes for children, the topics of which may be more in their wheelhouse.

Equally as engrossing as the art are the gardens at Cummer Museum. As noted on its website, Cummer Museum boasts some of the most important and enjoyable gardens in Northeast Florida. They’re back in tip-top shape after Hurricane Irma damaged them in 2017. You can find out what to expect to see by selecting the interactive garden tour option at Cummer Museum’s website.

The Cummer Museum is located at 829 Riverside Avenue. It’s closed Mondays but open every other day, usually from 11 a.m. to 4 p.m.

5. Kingsley Plantation
Another worthwhile take-in is Kingsley Plantation. It’s named after Zephaniah Kingsley, an aristocrat who owned the plantation back in the early 19th century, living there for approximately 25 years. While he may be the property’s namesake, the preserve is steeped in history, dating back thousands of years, to the Timucua, a Native American tribe who primarily resided in what is present day Northeast Florida and Southeast Georgia.

Zephaniah Kingsley was and remains a prominent figure in Jacksonville’s history and served on the Florida Territorial Council, among other notable positions. But he was also a slave trader and defender of the practice. There are several slave cabins built onto the sprawling property.

While touring the house is currently not available to visitors for safety reasons, they are free to roam the property, which stretches over 60 acres. If you’re interested in learning more about the history of Kingsley Plantation, there is an audio guided tour available daily up until 3:30 p.m. Kingsley Plantation is also pet-friendly, but dogs must be kept on a leash at all times.

If you have any questions before arrival, reach out by phone or email. Admission is free.

6. Friendship Fountain
From Chicago to San Francisco and several other cities, iconic fountains are found throughout the United States. But Friendship Fountain — appropriately located in Friendship Park — is not your ordinary geyser. In fact, for a number of years, it was the tallest man-made fountain on the planet, gushing water to heights of 120 feet and at a rate of 17,000 gallons in 60 seconds.

Friendship Fountain’s status as the world’s tallest has since been replaced by King Fahd’s Fountain, which was built in the early 1980s in Saudi Arabia. It sends water to skyscraping heights that are in excess of 850 feet. The second-largest is in Seoul, South Korea, called the World Cup Fountain.

What Cloud Gate (also known as ‘The Bean’)  is to Chicago, Friendship Fountain is to Downtown Jacksonville. Be sure to stop by and take a selfie or family photo in front of it.

The southernmost of the Talbot Islands, Fort George Islands hosts just about every outdoor activity under the sun, be it bicycling, fishing, bird watching, hiking or paddling. Small flat-bottom boats, canoes and kayaks can be launched out of the Ribault Clubhouse for paddling and you can venture out on a hike on the Fairway Loop Trail. Depending on which direction you take, you’ll go by familiar destinations, such as Kingsley Plantation or Point Isabel.

Fishing is another option at Fort George Island, with most of it going on at Fort George River. Just be aware that you may need to show your fishing license and must abide by the size and weight rules if you catch a fish. Depending on the variety, the fish needs to be of a certain dimension if you want to take it home. Visit the Florida Fish and Wildlife Conservation Commission for more information on recreational regulations. You can also find tips on how to fish if you’re thinking about taking up the hobby.

8. Jacksonville Zoo and Gardens
It’s safe to say that no touristy afternoon or weekend is complete in Jacksonville without taking a walk on the wild side at Jacksonville Zoo and Gardens. Located on 370 Zoo Parkway in the heart of Downtown Jacksonville, the zoo is an ideal family day activity, with more than 2,400 rare and exotic animals over the sprawling landscape. The dizzying amount of creatures that roam the grounds, waters and skies here are almost literally from A (Abdim’s stork) to Z (zebras) and many more in between. Some are incredibly hard to see, such as the Atlantic Stingray, which can blend in with their surroundings. Others can’t be missed, like the vividly colored Caribbean flamingos and rainbow lorikeets.

As one of only seven zoos in the country that has an animal wellness team, Jacksonville Zoo and Gardens is dedicated to its creatures’ quality of life. It also supports nearly four dozen conservation programs nationwide and throughout the world, such as the Gorilla Rehabilitation and Conservation Education Center in the Democratic Republic of Congo and the International Rhino Foundation in Southeast Asia.

Visit the website for ticketing, hours of operation and other details that can help you plan your day before arriving.

Be it for the history, wildlife, beaches or parks, Jacksonville is a great place to visit or live. That’s something we can attest to at Omni Financial.

With offices that serve Naval Station Mayport, Naval Air Station Jacksonville and Submarine Base Kings Bay, Omni Financial is proud to serve all those who serve or was formerly a member of any of the armed forces. We provide military loans to active duty and career-retired veterans in a variety of sizes, allotments and repayment terms. And we can get the money directly to you quickly and safely, so you can use the funds however and wherever you choose be it at home stateside or abroad.