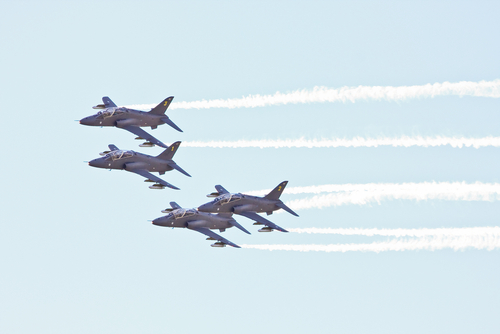 Are you and your family moving to Nellis Air Force Base? Whether you’ve been at your current base for several years or only a few months, packing up your belongings and much of your life can be quite the adjustment, for yourself as well as your loved ones. Having some idea of what to expect before you arrive can make the transition more seamless and stress-free.

Before you head out and begin the next phase of your military career, here are a few things to know about Nellis Air Force Base:

Where is Nellis Air Force Base located?

Nellis Air Force Base is headquartered in southern Nevada, roughly eight miles to the northeast of Las Vegas. Established in 1941 and originally known as Las Vegas Army Airfield, the base became an installation for the Air Force shortly thereafter. The first formal training for service members occurred in 1948, with the five squadrons involved at the time primarily using P-51 Mustangs. Around 15,000 P-51 Mustangs were built overall and were deployed mainly during World War II and the Korean War.

More than 70 years later, Nellis Air Force Base still hosts air combat exercises as well as close air support exercises. The installation’s namesake, William Harrell Nellis, participated in 70 aerial combat missions during World War II. A former resident of Searchlight, Nevada (approximately 57 miles south of Las Vegas and an hour away from the base itself) Nellis died in combat while serving in Luxembourg in 1944. The base was named in his honor six years after he was killed, on April 30, 1950.

What is Nellis Air Force Base most known for?

Nellis Air Force Base is probably best known as a location for advanced combat training. Dubbed as the “Home of the Fighter Pilot,” Nellis Air Force Base units coordinate training for composite strike forces, which involve a wide assortment of Air Force inventory as well as ground units from other military branches, including the Marines, Navy and Army. Over the years, Nellis Air Force Base has played host to units like the 99th Air Base Wing, 53rd Wing, 57th Wing, 57th Operations Group and 505th Command and Control Wing. Air Combat Command’s official website has some background information on several of these aforementioned units.

It’s also the home away from home for thousands of military families. When including military retirees, the base’s population is right around 40,000, with a workforce total of over 9,500 people, both civilians and active-duty military. This makes Nellis Air Force Base among the largest employers in southern Nevada, not to mention the entire state, based on the most recent figures available from Nellis’ website.

Can you visit Nellis Air Force Base?

With some restrictions, Nellis Air Force Base is open to the public. One of the more popular tourist attractions here is the Thunderbirds Museum. The Thunderbirds is the air demonstration squadron of the Air Force and is the third-oldest flying aerobatic team in the world, behind only the French Air Force Patrouille de France and the United States Blue Angels.

Typically the Thunderbirds Museum is open to tours Mondays through Fridays between 8 a.m and 4 p.m., but due to the COVID-19 pandemic, tour requests are not being taken until further notice.

Even if you live on the base, requests for a tour must be submitted no less than 30 days prior to the date, but no more than 90 days in advance. Additionally, there are age restrictions, as entry may be prohibited to children who have yet to reach high school-age.

To arrange a tour of the entire base with your family in tow, visit the tours section of Nellis’ website.

What are some of the activities available at Nellis Air Force Base?

With a land area covering 14,000 acres and an overall footprint spanning 5,000 square miles (including restricted airspace), Nellis Air Force Base covers a wide space. Among the things to do here when you’re not on duty is golf. The Sunrise Vista Golf Course is 18 holes and covers a little more than 7,000 yards. It’s open for all ages and includes a driving range as well as a golfing school, if you or anyone in the family is interested in improving their stroke or becoming a better all-around golfer. Prices range between $15 and $33 for weekdays and weekends and the course is open year-round.

Nellis Air Force Base also has a wide array of dining options at The Commissary, the base’s supermarket that also has a fully operational food court. Here is a partial list of the restaurants you’ll find here:

Other dining facilities include Crosswinds Inn (which is closed for renovations at the present time) and the Touch N’ Go Flight Kitchen. It too is closed for now, but you can visit the website for updates on when it will reopen.

As for other places to go to or see near the Nellis Air Force Base, options include the Discovery Children’s Museum, Seaquest, the Smith Center for the Performing Arts and Las Vegas Urban Adventures. Several of these places are in downtown Las Vegas, so not far from the base. Be sure to check their respective websites for pricing and additional information on any COVID-19 restrictions.

Of the three total installations in Nevada, Nellis Air Force Base is a great place to live. We are confident you’ll enjoy your time there. Should you need a personal loan during your stay, Omni Financial may be able to help. Please contact us to learn more about us as a company and our loan offerings.