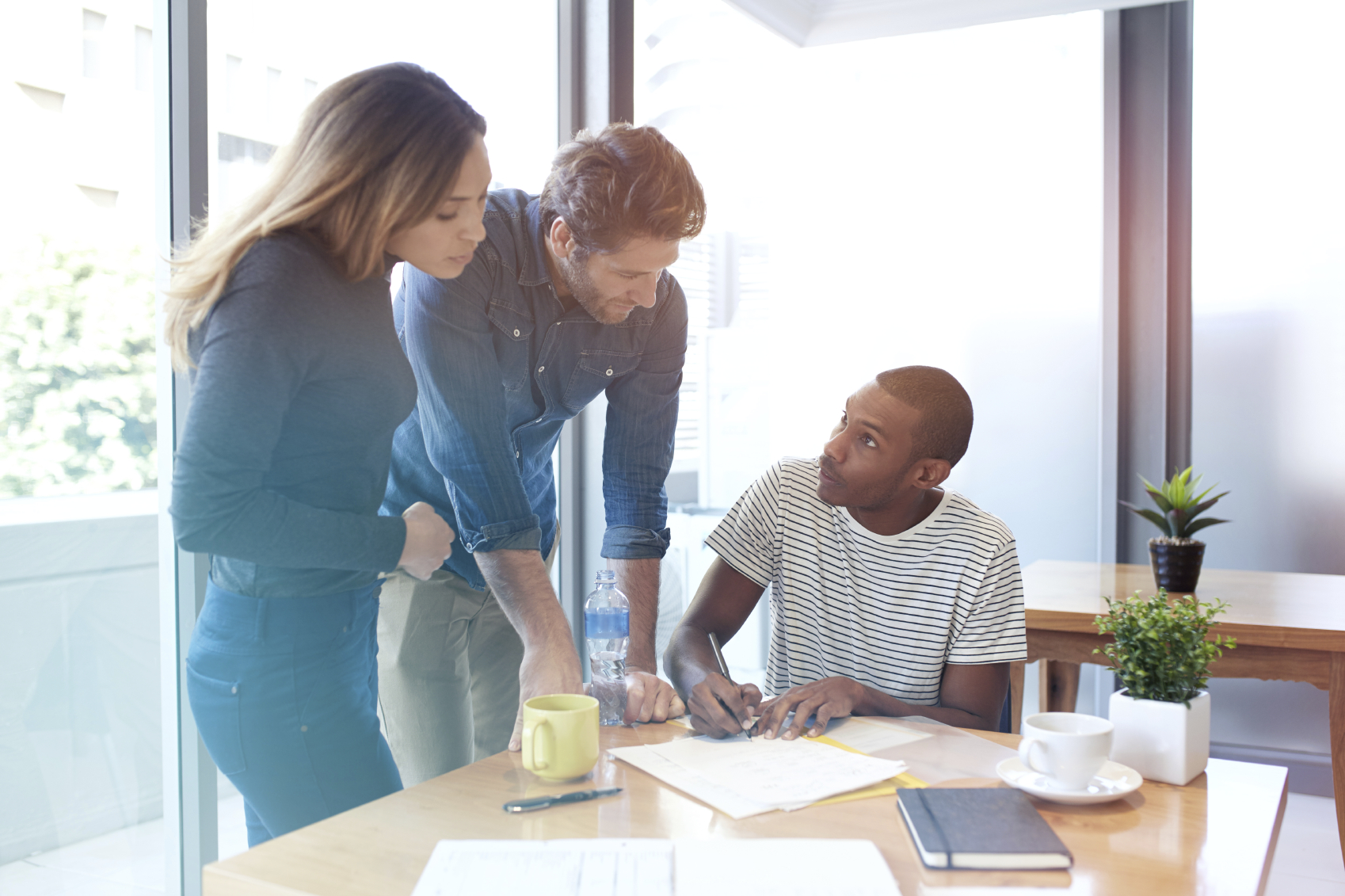 One of the foundations of a fulfilling post-military career is doing something that you love. But you still need to earn money and make a living.  Talented people who possess a driving passion for the visual arts, writing, music, or communications may feel that having a thriving, well-paying career in these competitive areas might be difficult to achieve. To give yourself the best chance at success, it is important to not only work hard and stay focused, but to also look at all your professional options.
To provide some inspiration, we’ve listed a variety of creative careers you may not have considered, as well as some famous veterans who have made a name for themselves in these artistic occupations.

Match your love and aptitude for visual expression with a career in the visual arts. Technology and the growth of digital media have expanded the job opportunities for those interested in this field.  The following list includes just a few of the variety of professions related to the visual arts:

Visual artists who were veterans:
Norman Keith Collins – Tattoo Artist
Legendary tattoo artist Norman Keith Collins, also known as “Sailor Jerry,” was a former member of the United States Navy. He learned the art of tattooing as a child. When he traveled with the Navy he became inspired by the art of Southeast Asia which helped influence his tattoo designs.  Sailor Jerry lived in Hawaii and mentored and trained other tattoo artists, including Ed Hardy.
Bob Ross – Artist
Before becoming a landscape artist and host of “The Joy of Painting” the soft spoken Bob Ross spent 20 years in the Air Force, becoming a Master Sergeant. Ross credited his painting technique to the time he spent in the military. He grew up in Florida and was stationed in Eielson Air Force Base in Alaska where he saw snow and mountains for the first time. He loved painting the landscapes and developed quick-painting methods so he could paint a lot and sell his paintings. He left the Air Force when he realized he could make more money selling paintings than being in the military.
Moses Ezekiel – Sculptor
Sculptor Moses Ezekiel was the first Jewish cadet to attend the Virginia Military Institute (VMI). After fighting with the Union army troops in the Civil War, he went to Berlin to study at the Royal Academy of Art.  Ezekiel remained in Europe working on over 200 sculptures and paintings, many with military themes. One of his most renowned works is the marble “Religious Liberty” sculpture which is now housed on the  grounds of the National Museum of American Jewish History in Philadelphia. He also created the memorial, Virginia Mourning Her Dead, at VMI where six of the 10 VMI cadets who were killed at the Civil War’s Battle of New Market are buried.

If you love to write, there are many career paths you can pursue.  Whether you are an aspiring novelist, or are looking for a more stable full-time job, there are many professions that give you the opportunity to use your writing skills and talents, including:

Many writers are self-employed, while others have salaried positions at publishing companies, government organizations, non-profit groups, advertising agencies, broadcasting companies, pharmaceutical firms, schools, manufacturers, and other businesses and firms.
Writers who were veterans:
J.D. Salinger – Author
The Catcher in the Rye author J.D. Salinger had already started his literary career when he was drafted to serve in World War II. He spent two years in the military where he saw action at the Battle of the Bulge while also working on his landmark novel about Holden Caulfield.
Joseph Heller – Author
Joseph Heller, author of Catch-22, a satirical novel set during World War II, was also a veteran. He was a member of the U.S. Army Air Corps and flew 60 combat missions. Catch-22 was based on Heller’s military experiences and as stated in Britannica.com, the book is considered “one of the most significant works of postwar protest literature.”

If you are a member of a U.S. Army Band you already have a rewarding career in music. But if you are leaving the military and are interested in turning your musical talents into a career, there are several job options you can consider, including the following:

Musicians who are veterans:
Larry Combs – Orchestral Clarinetist
West Virginia Music Hall of Fame inductee Larry Combs is considered one of the world’s leading orchestral clarinetists. He was the Solo Clarinetist Emeritus in the Chicago Symphony and is a founder and member of the Chicago jazz group, the Combs-Novak Sextet. Prior to his civilian success he was a member of the Army for three years and was assigned to be a member of the United States Military Academy Band.
Steve Gadd – Studio Drummer
Steve Gadd is a renowned studio drummer who has worked with Paul Simon, Steely Dan, Chick Corea, Eric Clapton, Paul McCartney, Aretha Franklin, and many other famous musicians. While Gadd was an accomplished drummer as a high school student, he honed his skills during his time in  the United States Army’s Stage Band. He was a member of the Army from 1968-1971.

There are a wide range of occupations and career paths available to people who have skills and abilities related to artistic performance. Jobs may be on-stage or behind-the-scenes. The following is a list of just a few of the professions you may want to consider:

Theatre professionals who are veterans:
Johnny Meyer – Playwright and Actor
Former Army Airborne Ranger and current government PhD. student Johnny Meyer is a playwright and an actor. His stage play “American Volunteers” won the 2010 Mitchell Award at the University of Texas and he has performed at the White House. He won numerous military awards and badges during his time in the military, and draws upon his experiences to create his works.
Rob Riggle – Actor and Comedian
Actor and comedian Rob Riggle is known for his work on Saturday Night Live and Comedy Central’s The Daily Show, as well as roles in films including The Hangover, 21 Jump Street, The Other Guys, and many others. Before he started making people laugh for a living, he was Lieutenant Colonel in the United States Marine Corps Reserve.

Communications careers encompass aspects of a variety of creative areas including writing, music, and the visual arts. They also include jobs that involve coming up with inventive ideas for marketing products and services.  Channel your talents and business acumen into a creative position at a media company, production company, advertising agency, or radio station. Large corporations, colleges, and non-profit organizations also often employ an in-house team of communications professionals. Some examples of jobs in communications include:

Communications professionals who are veterans:
Jack Limpert – Magazine Editor
Jack Limpert, a distinguished editor of The Washingtonian magazine for almost 50 years, was in the United States Air Force from 1954-1956. After leaving the Air Force he went to college, and worked at the United Press International news service, eventually becoming a highly decorated reporter for The Washingtonian. He was inducted into the Washington Journalists Hall of Fame and has won an Emmy for his contributions to Something the Lord Made, an HBO movie.
Oliver Stone – Screenwriter, Director and Producer
Academy Award-winning screenwriter and director Oliver Stone served in the Vietnam War and was awarded a Bronze Star for Gallantry and a Purple Heart. After the war, he started writing screenplays and making short films, eventually hitting the big time with his screenplay for Midnight Express for which he won an Academy Award.  Throughout the years Stone directed many critically acclaimed and sometimes controversial films including Platoon, Wall Street, Born on the Fourth of July, World Trade Center, and many others.

If you have been searching for a job in a creative field, there are many online resources that can help you land the position of your dreams. Among the many resources is this article that lists 13 essential job boards for creatives. You can also venture out on your own as a freelancer.  There are many paths to career success, so do your research, continue to strengthen your skills, and keep working toward your goal.  Good luck!