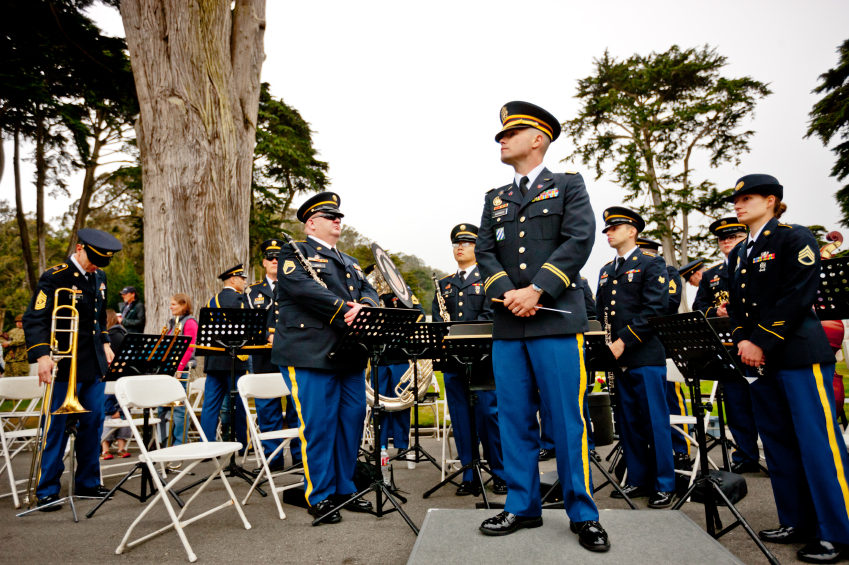 Everyone knows that the United States Army has the greatest soldiers, but did you know that it also has some of the most talented musicians in the world?  Through its Army Music Program, the United States Army gives serious, dedicated musicians an opportunity to play music professionally while supporting our nation. In fact, the U.S. Army is the largest employer of musicians in the world. According to the U.S. Army website, the mission of the program is to “provide music throughout the spectrum of military operations to instill in our soldiers the will to fight and win, foster the support of our citizens, and promote our national interests at home and abroad.”

members are full-time musicians who entertain troops, boost morale, perform at military ceremonies and more.  The musicians must pass an audition, complete nine weeks of Basic Combat Training, and attend 10 weeks of musical study at the U.S. Army School of Music in Virginia Beach, VA.  As a career musician, Army Band members are not only paid, but they also receive free medical and dental care, professional quality instruments and music supplies, tuition assistance while on Active Duty, paid vacation, entrance to the Army at an advanced pay grade, and other benefits.

– These are premier bands that have unique missions and acceptance requirements. They regularly perform for prestigious national and international events including foreign dignitary visits and presidential inaugurations.  The four special Army Bands are as follows:
The U.S. Army Band (Pershing’s Own) – Based in Washington D.C., this band which was established in 1922, has a long history of performing at high-profile national and international events, including the funeral of President John F. Kennedy, the national Bicentennial Celebration, several Olympics, the Ground Zero memorial service,  and many others. View this video of the band performing “Third Army March.”
The Old Guard Fife and Drum Corps – The musicians in this unit perform the music of the American Revolution and wear uniforms that are designed to look like the ones worn by the musicians of General George Washington’s Continental Army. The unit is stationed at Fort Myer, VA and is part of the 3rd U.S. Infantry Regiment (The Old Guard). They perform at major parades, historical celebrations, and major sporting events, and serve America as a goodwill ambassador at performances around the world. Here is a video of the U.S. Army Old Guard Fife and Drum Corps opening the General Session and you can listen and download some audio recordings at the Fife and Drum website.
The U.S. Army Field Band – Known as the “Musical Ambassadors of the Army,” the U.S. Army Field Band travels thousands of miles each year performing at festivals, city and state commemorations, centennial celebrations, and other events. The group has also performed at presidential inaugural parades and in joint concerts with the Boston Pops, Cincinnati Pops, and Detroit Symphony Orchestra.  In this video, members of the U.S. Army Field Band perform for students during breakfast at Fort Sam Houston.
The U.S. Military Academy Band – This is the Army’s oldest active band with a lineage that dates back to the Revolutionary War.  The band is comprised of graduates from America’s finest music schools. The West Point-based band performs over 1,600 times throughout the year at military and patriotic ceremonies, public concerts, parades, Internet, radio and television broadcasts, and many other events throughout the northeastern U.S.  In this video, members of the U.S. Military Academy Band bring their musical talents to the ice at a West Point hockey match to perform the Star-Spangled banner.
To learn more about United States Army Bands and becoming a band member visit the GoArmy website.